Vote for Nr. 10! – What everybody should know about co-creation

Update: voting is over

If you do not want to read the whole article please do one thing right now:

Then invite your friends to vote for Poster Nr. 10

When I was asked if I would attend the World Standards Day 2012 Poster contest I hesitated for a moment.

I had attended already once in 2011 and didn’t even make it into the final. I had come up with a mediocre design idea that I spent many hours drawing. There were lots of dogs and a cat in the poster and it took me a long time to adjust the design and improve the colors. But although I liked the result, I clearly saw the limitations and was not surprised that my entry did not make it, because it was not neutral, clean and corporate enough.

It did not work then, so why should I try again?

To avoid the same problems I quickly came up with three conditions. If I met them, I would proceed. If I could not come up with something that matched these three restrictions, I would turn down the challenge within three minutes.

I scribbled down an idea, saw that it met all three restrictions and asked Guilaine if she thought it would be worth a try. When she said yes, I committed to join the contest.

Now, here is the idea:

The most simple design element I could think of was the „rule of three“.
Stories are divided into beginning, middle and end. Steve Jobs always named three examples (in his presentations). Even GOD prefers to be three persons instead of just one.
Since the theme was about waste and how standards would avoid waste I simply drew three columns, following the rule of three, put a „waste area“ left and right and the solution into the middle.
First condition: check.

Instead of drawings I decided to use words only. Nothing personal, just clean, and neutral elements.
Second condition: check.

Using word clouds I could fill up two columns with words that would look like waste. Broken words. A sea of dirty words. Maybe cracking, cutting and twisting words or use ugly colors in order to make it look like waste. The middle column would be filled with a wordloud made of the WSD message, but the words would be readable and the WSD slogan would stick out. Then I would contrast the good from the bad somehow.
Third condition: check.

I love word clouds. I had used word clouds recently when I made an illustration of Daniel Ellsberg for an exposition in the Künstlerhaus Bregenz. I want to go further and explore the use of words in paintings and posters in other ways. Although I am not a graphic designer, creating the WSD poster would be at least an opportunity to learn something about using words.

Three days before the deadline (yes, I know …) I started to create the „waste area“ with word clouds. I realized very fast that the original idea of using the WSD text for the „waste area“ did not work out as planned. The words were too distracting. Also, the ugly and brownish colors I had had in mind, looked … well ugly. I went back to basics and made it black and white instead, cutting and pasting the original WSD text completely. Then I added numbers and other signs like xhxj8900 …p-//ß2ß++?*doUuDERstAnd?whaTimeEan//? Now it looked like a neutral sea of waste, simplified by using words only.

In order to show some contrast I used black letters on white background for the two outside columns. The middle column however, would be made up of bright letters on a black background.

When I designed the word cloud with the WSD text and slogan for the middle column I realized that it was impossible. There was simply not enough space and the number of words were all too distracting. So I simplified again and decided to show the slogan only. I tried various ways of using word clouds and finished the poster. 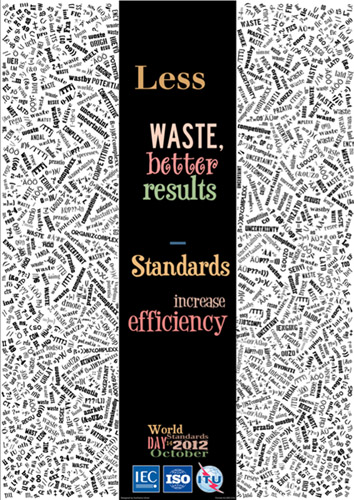 But I was not convinced. The original idea in my head looked really nice, but as it often happens in a creative process, most ideas do not survive contact with reality. The word cloud idea had somehow failed me.

I thought briefly about giving up. At that moment the inner voice was clearly having the upper hand. The voice in my head shouting at me things like: „You are a complete failure and the poster was a complete waste of time and energy. You are an idiot to even try this thing! Throw it away and do things that other people tell you to do instead of trying to come up with your own stuff which is nothing but stinky shit!“ I pondered throwing it all into the bin, but then I remembered several great ideas that I was keen to follow, no matter what.

As some very bright people said:

Ray Dalio, the worlds most successful hedge fund manager, wrote a very nice peace about how to be successful. His ideas are applicable for any field, not just finance. They are valid for any creative process. One of the key aspects in his Principles explores the idea that failing is an essential part of success. Same goes for taking in feedback early and adjusting early according to customer feedback.

I had violated several of these ideas in the past and I was keen to make it better.
„Failing is ok, I said to myself, „but first I have to ask for feedback, I have to adjust my work and only afterwards am I allowed to judge and evaluate what I have done.“

Back at work I asked Miki for feedback.

Miki is a very clever guy, he has a great eye for details and is not afraid to give honest feedback. An invaluable asset.
He almost cried when he saw my design and said that it was BS. „Great“, I said, „but what could I do to fix it?“
„Take one font only, maximum two fonts. Maybe Arial, something that is used in standards publications.“ He was so kind to even create a design variation for me of what he thought would look better.
Although I did not go with his version I followed his advice. I completely ditched the idea of word clouds for the central column, that had held me back and used simple Arial instead. Changing the size did not look good, but then I came up with a range of colors, similar to the colors of a rainbow. That made a well enough contrast to the black and white „waste area“. 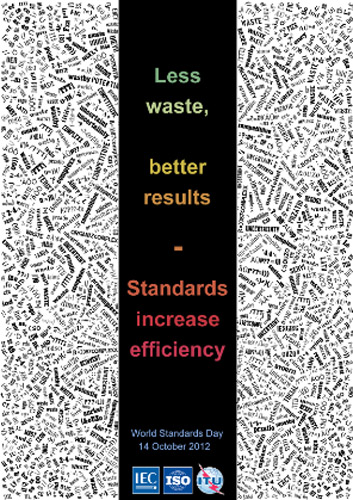 Then I asked some more colleagues and Gilles, a great graphic designer, explained that using capital letters would make the slogan more stable and corporate. He advised me to move some of the words up, some of them down and it made a big difference. Why hadn’t I though of this myself?

I asked Christine, Helene, Severine, Ethel, Zoe, Carlos, Claire … for some more feedback, put the pieces together and right in time before the midnight deadline I sent the poster by e-mail to the WSD. 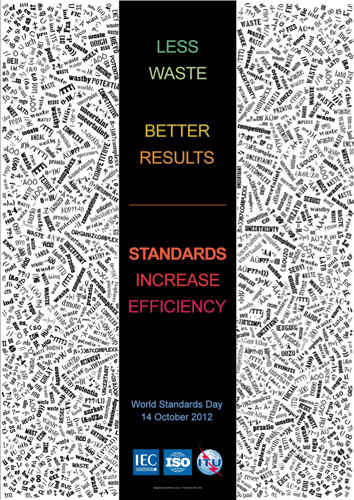 Then I checked my other e-mail and saw Guilaine’s feedback from Asia. She wrote that she liked the poster, but suggested to change the order of the colors. It should go from red = bad = waste to green = good = efficiency.
Holy shit. That was a wonderful idea! Why hadn’t I thought of this aspect myself?

I went back to photoshop, changed the colors, it looked much better now, and sent the second version off, 4 minutes before cut-off. 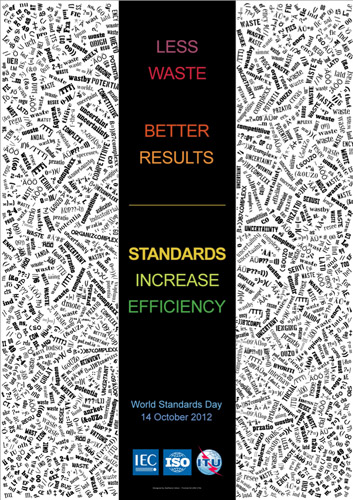 You can see the final poster in high resolution here.

Out of 280 posters 22 posters posters were chosen for the final. My version is one of them.

And the catch is this:

You can choose the winner!

The public will make the final decision and whichever poster gets the most votes will win.

Please help me and my friends who were so kind to help me with their invaluable input. Vote for Poster Number 10 now.

You probably don’t care if I win or not, but Nr. 10 has to win, because with a little price money I will be able to say thank you in style and take my friends who helped me to a restaurant or bar or something. They deserve it and you can make it happen.

What you can do now: